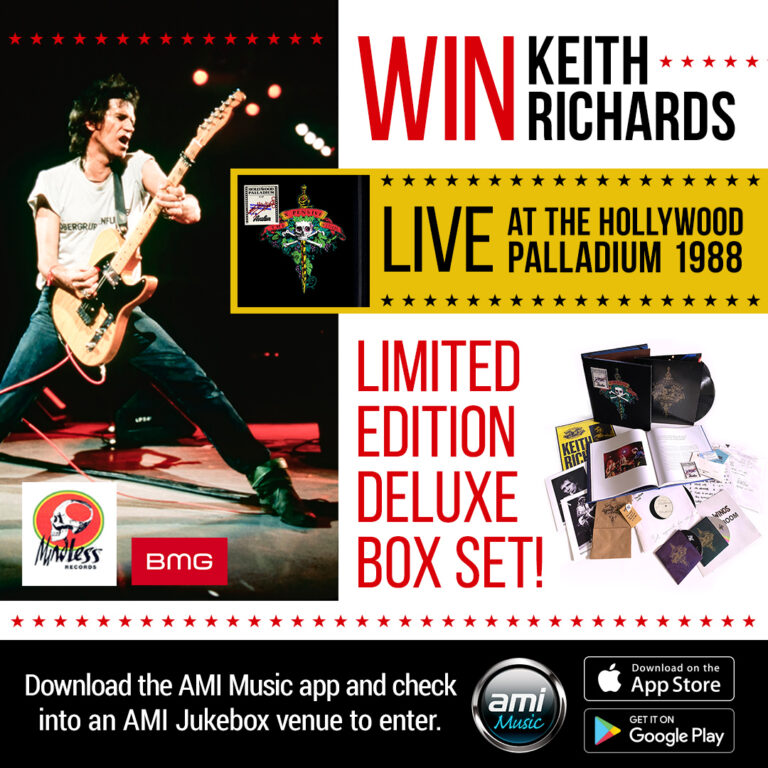 AMI announced their newest contest, celebrating guitar legend Keith Richards. One lucky entrant will win the limited release Live at the Hollywood Palladium from Keith Richards and the X-Pensive Winos. The deluxe box set includes remastered versions of the December 15, 1988 concert on both CD and 2x 180g LPs plus a bonus 10” vinyl of 3 previously unreleased tracks. Additionally, the box set includes a DVD of original concert footage and a 40-page hardback book featuring an essay from renowned rock writer David Fricke alongside a new interview and rare, never-before-seen photos from Richards’ own archives. Also included are reproductions of archival materials, including a setlist, dressing room sign, VIP backstage passes, tour t-shirt, guitar pick, and more. The contest is open November 13, 2020 through December 2, 2020. Music fans can enter the contest using the AMI Music app, available on iOS and Android. Contest entry is also available on any participating AMI Jukebox.

Best known as co-founder and guitarist for the groundbreaking rock and roll band, The Rolling Stones, Keith Richards has also enjoyed musical success on his own. His first foray as a solo artist came in 1988, with the critically-acclaimed Talk is Cheap. A cross-country U.S. tour accompanied the album, with a stop on December 15 at the famed Hollywood Palladium in Los Angeles. No stranger to the venue, Richards joked to the crowd about previously being thrown off that very stage, referring to a 1972 incident in which he tried to perform with his idol, Chuck Berry. Backing Richards on this tour were a group of musicians and friends, dubbed The X-Pensive Winos. Members included Waddy Wachtel, Ivan Neville, Bobby Keys, Sarah Dash, Charley Drayton, and Steve Jordan.

The live album, which featured several Rolling Stones songs was originally released in December, 1991 at the same time the Stones were staging their Steel Wheels/Urban Jungle comeback tour. This reissue offers an all-inclusive look back and a chance to relive the night through the music, photos, concert footage, and promotional items.

Like all music fans, AMI is eager for the return of live music, from stadiums to dive bars. AMI is proud to offer a chance at winning this exclusive box set, full of live music, memories, and memorabilia. For a limited time, AMI jukeboxes will be also be featuring a Keith Richards playlist that highlights his biggest hits with and without The Rolling Stones. All are encouraged to check out the playlist and enter the contest using the AMI Music app or by visiting a nearby AMI jukebox venue.

You might also like
One of the following
Starting Up Your AMI Jukebox Post-Pandemic
Embrace (TOUCHLESS) Digital Music Solutions with GAD Vending
Why is the AMI NGX Ultra the Top Selling Music Video Jukebox?
Recent Posts
Recent Comments